Welcome to the fifty-second issue of Racket News.

Over two years after Racket News launched (and not counting everyone who reads RN on the website), we have now over 400 subscribers to the newsletter. A big warm welcome to all the new ones. The big news this issue is the new Syntax Parse Bee just launched, initiative of Ben Greenman and Stephen De Gabrielle. Consider looking at syntax-parse and creating a submission.

Grab a coffee and enjoy the issue! 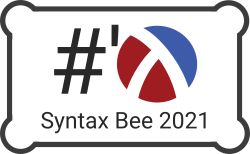 Write a macro with Racket this summer! Win stickers!

The purpose of this competition is to grow the syntax-parse-example documentation and repository to grow as a resource for the Racket community. (You can also contribute directly to the syntax parse examples repository)

It’s like a Quilting Bee, but for syntax parse macros!

PS a ‘Bee’ is a community effort toward a common goal. A quilting bee is for making a quilt. In this case the ‘quilt’ is a patchwork of syntax-parse macros.

As we hope to include many new examples derived from the entries in the syntax-parse-example documentation and repository we ask entrants to licence their code under the same MIT license as used by Racket, and text under the http://creativecommons.org/licenses/by/4.0/ license.

No luck last issue with the call to fix issue 1463 of racket/racket. Therefore the Call to Racket is renewed on this same issue. Go for it! Who’s going to have a go at this one? It can be you! If you are interested in fixing this but need some guidance, feel free to comment on the issue page. Will you be our next Champion?

This week’s project in the spotlight is Sauron by Lîm Tsú-thuàn.

Sauron works as a DrRacket plugin to provide everything an IDE shall have!

Programmers have come to embrace dynamically-typed languages for prototyping and delivering large and complex systems. When it comes to maintaining and evolving these systems, the lack of explicit static typing becomes a bottleneck. In response, researchers have explored the idea of gradually-typed programming languages which allow the incremental addition of type annotations to software written in one of these untyped languages. Some of these new, hybrid languages insert run-time checks at the boundary between typed and untyped code to establish type soundness for the overall system. With sound gradual typing, programmers can rely on the language implementation to provide meaningful error messages when type invariants are violated. While most research on sound gradual typing remains theoretical, the few emerging implementations suffer from performance overheads due to these checks. None of the publications on this topic comes with a comprehensive performance evaluation. Worse, a few report disastrous numbers. In response, this paper proposes a method for evaluating the performance of gradually-typed programming languages. The method hinges on exploring the space of partial conversions from untyped to typed. For each benchmark, the performance of the different versions is reported in a synthetic metric that associates runtime overhead to conversion effort. The paper reports on the results of applying the method to Typed Racket, a mature implementation of sound gradual typing, using a suite of real-world programs of various sizes and complexities. Based on these results the paper concludes that, given the current state of implementation technologies, sound gradual typing faces significant challenges. Conversely, it raises the question of how implementations could reduce the overheads associated with soundness and how tools could be used to steer programmers clear from pathological cases.

Some data about the activity in the Racket et al. repositories, for the month of June, 2021.

The next issue is planned for publication during week 29, specifically July 19. Contributions welcome - deadline for next issue: Sunday, July 18, 2021.